Wrabacon specializes in developing creative packaging & automated conveyor system solutions for our customers that make time intensive tasks efficient and easy. A recent example is a custom designed and manufactured series of conveyors that drastically improved the efficiency of a manual produce packing operation for a regional distributor and specialty packaging company of organic produce.

The client needed to be able to sort up to 6000 lbs. of produce an hour, grade that produce, and then package it in a variety of ways including loose product, cased product, and bagged product. Prior to the Wrabacon system, the grading portion of the operation was done by opening a box of produce and hand picking the good from the bad and transferring the bad product into a separate box which was then disposed of, which was time consuming and inefficient.

END_OF_DOCUMENT_TOKEN_TO_BE_REPLACED

An artisan regional cheese manufacturer faced a challenge. Their production line was completely manual and very slow. The problem was that the operators had to manually denest and place clam shell trays on a conveyor. Then they manually place finished cheese balls in the clam shell. Once this was completed, the operator would manually close the calm shell. They turned to Wrabacon to manufacture a packaging line that would transform their production line from a completely manual system to a semi-automatic packaging line.

The new system designed by Wrabacon consisted of a tray denester, a conveyor to transport trays to the operators, and an automatic lid closer. All equipment was built in stainless steel to meet the high demands and sanitation needs the food industry requires.

The denester utilizes a photo sensor to trigger the cycle. The sensor is mounted on the conveyor and when clear, the denester drops the trays onto the belt. The conveyor has variable speeds, so the denester rate is controlled by the speed of the conveyor. After denesting, the clamshells are manually filled with product.

After filling, the clamshells travel downstream to the closer with the lid open. A rail guide and partially closes the lid as it transfers to the conveyor. Once the lid is partially closed, a set of powered rollers snap the lid around the perimeter of the clamshell. Wrabacon designed the closer with power rollers since applying pressure to the top center of the lid might not seal the container properly.

Our Solutions in Action

While designing a custom conveyor system Wrabacon was challenged to provide a reject system to reject under/overweight product from a high speed processing system. The product passed the check weigher at 220 FPM.

Our team of designers went to work and after testing several solutions the decision was to design and manufacture a stainless steel over-head servo controlled over-head reject system. Because the product was wet and the system was to be installed in an area where wash down would take place the reject system was designed entirely with wet duty and wash down components.

Due to the limited space where the reject system would be installed the over-head system was designed with paddles to sweep the product. This design choice saved space by eliminating side pneumatic cylinders which are typically used in reject systems. As product passes over the check weigher a signal is sent to the reject system should an overweight or under weight product be detected. Once the product enters the reject system a paddle that is attached to a rotating chain sweeps the product into a reject bin.

This just one of many conveyor and system solutions offered by Wrabacon. Click here to browse our custom automated systems.

Our diverse experience in the industrial automation industry has prepared our team to identify and overcome a variety of challenges presented by our clients’ products, facilities and processes. Recently a national wet wipe manufacturer tasked us to develop an advanced handling system to integrate into their existing facility. This was an entirely new manufacturing line, custom designed to increase production to meet new orders and keep up with demand.
The first challenge the product posed was the nature of the product itself. Due to the wet, damp characteristics of the wet wipes prior to packaging, the entire handling system was designed and built with stainless steel conveyor components. The second challenge was accumulating wet wipes from the converter.

To ensure the handling system operated seamlessly, we teamed-up with a conveyor chain manufacturer to design custom chain that would allow accumulation of a wet product, or in this case, the wet wipes. This process took place in the low-pressure accumulation area noted in the system plans. At Wrabacon we welcome these challenges to keep our knowledge and skills ahead of the rest.

The Handling System and How It Works 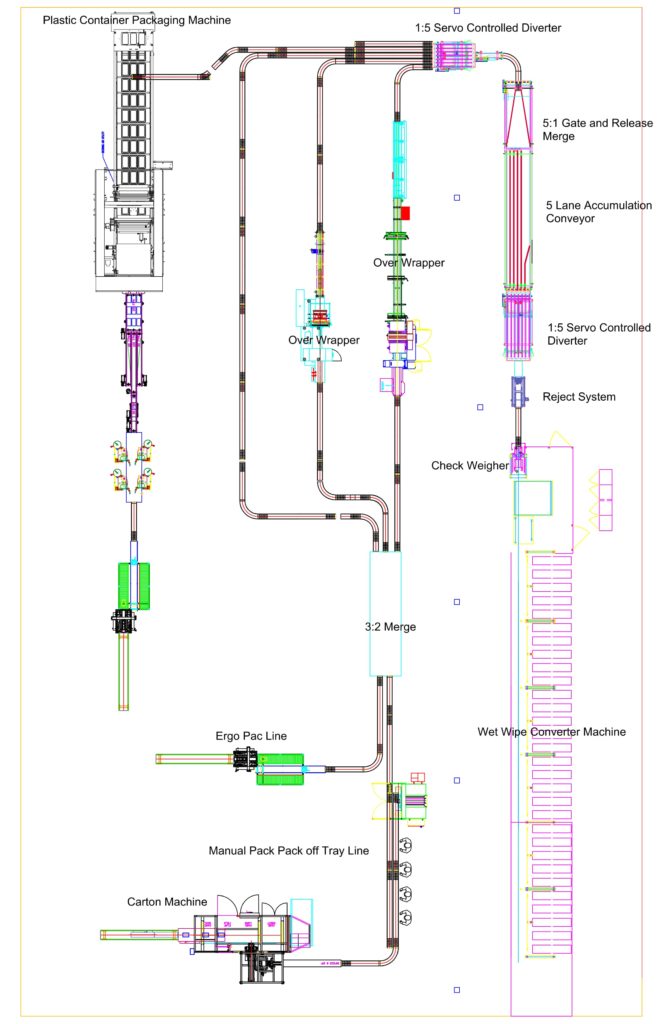 The basic process for the handling system is as follows. The wet wipes are produced from a converter and transported to an accumulation system which then feeds two existing high speed over wrapper packaging machines. If wipes are not sent to the over wrappers they are sent to a machine that places them into plastic containers. If the wipes are over wrapped the packages are sent via the 3-1 merge to either a hand pack line or a cartoner machine.

Stacks of wet wipes transfer through a check weigher in a single file. This effectively measures the weight of the product and indicates that each container has the correct moisture content. Product is then transferred onto a short reject conveyor equipped with an overhead sweep mechanism. This sweep mechanism is used to reject stacks of wipes from the line that could disrupt downstream elements of the handling system. The wet wipes are rejected based on a signal from the checkweigher.

After passing through the reject conveyor, the stacks enter a 5-lane tunnel style diverter. In normal operation, the stacks of wipes travel straight through the diverter, enter a merge system around a ninety-degree turn and onto the final diverter. During normal operation the stacks enter the final diverter and are equally distributed to the four downstream lanes. Based on a downstream signal, if a wrapper is not online, the diverter diverts the stacks evenly to the remaining wrappers. If accumulation is required, the first diverter diverts the wipes evenly to five low back pressure accumulation conveyors where the stacks accumulate.

Each conveyor is approximately 18’ long and holds 30 stacks of wipes (based on a 7” long product). After the accumulation section, the gate and release merge system releases lanes of the accumulated stacks to merge them back into one lane for the final divert when the need for accumulation goes away. The gate and release merge systems are located at the end of the low back pressure accumulation conveyor. The stacks merge to the center of the merge conveyor using two vertical side belts that help keep the stacks together. Both diverters are “tunnel” style and utilize servo motors for positioning.

After the second diverter, we designed and built a series of conveyors that take the stacks of wet wipes to the wrappers. Lane one feeds the closest wrapper, lanes 3 and 5 are the future wrapper lines. Lanes one and two travel around a ninety degree turn and then through to the corresponding wrappers. After the wrappers, the two lines merge into one and enter one of two downstream lines (ergo line or tray line). The tray line will consist of a dual pack off conveyor and a tray conveyor. The merge will be constructed wide enough to handle the future line three.  Line four travels straight down to a thermoform line where the stacks are manually loaded into the thermoformer.

This system included numerous conveyor lines and denesters. In all, production increased twofold along with eliminating several ergonomic issues.

If denesting is the game then Wrabacon, Inc. is the one to contact for your denesting needs.  Wrabacon designs and manufactures denesting equipment for all types of products. Should it be cups, buckets, trays, formed fiber products or any other special product, Wrabacon is the one to turn to.

How Do Denesting Systems Work?

Wrabacon Inc., designs and manufactures denesting equipment in stainless steel to meet the demands of the food industries stringent requirements for sanitation and cleanliness. Many designs incorporate the following: easy operation, multiple product magazines,  in line conveyors to transfer product to the filling line, and castors for ease of movement from one line to another.

Denesting for Food, Drink, and Much More

Here at Wrabacon, we have a knack for creative automation. Why? Because it makes a difference.  Ever since the Roman period, automation has been used to make all kinds of tasks easier. After all, you’ve probably heard the saying, “Work smarter, not harder” haven’t you? That saying could very well be at the heart of automation. Since then, the science has become a central part of the industrial and manufacturing worlds. But before we can get into the incredible possibilities of modern pick and place systems and what makes them successful, it might help to take a look back at where it all began.

Consider for a moment the industrial revolution. One of the most important industries during this time, the textile industry, experienced unprecedented growth that changed the world in a number of ways – all due to automation equipment like the spinning jenny and the Spinning Mule. These inventions, while primitive by today’s standards, were used to spin cotton and other fibers into yarn. You might be wondering, “What does that have to do with a pick and place system?” But consider it this way: In terms of innovation, this was the cutting edge. A machine was being used to produce a new product. To, “place” one component into another.  In the very same way, modern pick and place systems are used to more effectively produce all kinds of products, from food to electronics. While 19th century automation systems were “placing” one product into another to create yarn, modern pick and place systems go so far as placing surface mount devices onto printed circuit board. They might be different products, but the same principle is at play.

So what made textile automation successful so many years ago, and what makes a successful pick and place system possible today? First, it has to be efficient.  Looking back, coming up with a groundbreaking automation system during the industrial revolution might seem relatively simple by today’s standards. However, automation systems for manufacturing electronic components, for example, are a bit more complex.  Efficiency relies on every aspect of the production line working together to be faster, more  reliable, and more productive. In order for that to happen, you must understand your feeder requirement and your speed and capacity requirements.  On top of that, it’s important to remember that a pick and place system shouldn’t be designed for just the present. It should be designed for the future as well. This is one major difference between the earliest automation equipment and the advanced systems used today.

On another level, a successful pick and place system also needs to be versatile. While this might have been impossible for early automation systems, any advanced pick and place system will be able to accommodate for changes in production, product, component size, and more. This might involve modular design to introduce new automation components, such as tray feeders, stackers, and vision systems. When it comes down to it, just about anything is possible these days.