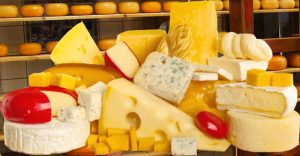 A large international cheese company approached Wrabacon seeking improved efficiency when it came to their process of producing trays packed with tubs of cheese.

Cheese is one of the most popular foods in the world, and in general, most people will tend to have several types of cheese in the fridge at any given time, leading to an incredible demand on suppliers to be able to continuously stock a customer’s favorite forms of cheeses wherever they might shop for it — with these suppliers including restaurants, grocers, and convenience stores. In response, many companies turn to automated systems that not only must keep pace with this demand, but also be reliable and precise to ensure trays and boxes are fully packed every time. Maximizing efficiency and speed ensures that customers will be able to get the cheeses they want, when they want it, and continue coming back for more.

Wrabacon’s solution was to custom design and manufacture multiple pieces of equipment to be used in a new tray loading system to replace parts of the existing tray loader. The product rate is approximately 80 jars per minute.

The bottles exit an existing labeling system and transfer through a 36” long conveyor and then onto the Wrabacon diverter conveyor. They enter the tunnel style servo-controlled diverter and are diverted into two or three lanes (depending on product size). The diverter diverts three or five per lane (depending on product size). At the end of the conveyor, there is a pneumatic stop that allows the product to accumulate in each of the lanes.

When a complete array is ready, the gates open and transfer the array to the tray loader. A signal is sent to the loader when a complete array is ready. When an array is ready for picking (signal received) the tray loader extends down to the array, side clamp and then picks up the array, traverses across the tray and then places the array into the tray. After loading, the tray is released downstream and transfers to an existing shrink bundler. Meanwhile, the next array is being readied and the process repeats. When changing over from the three-array to the five-array, the operators will need to select the product on the HMI and change over the guides on the conveyor.

The trays are formed by a tray former (by others) on a new mezzanine (also by others). The trays are discharged onto an overhead conveyor with the wide edge leading. The empty trays travel a short distance before being pushed into a twin belt lowering system. The trays are pushed between the flights on two vertical conveyors. When a tray is received, the flights lower one pitch, and wait for the next tray. This continues until the tray has reached floor level, whereupon it is pushed from the flights on the vertical conveyor, onto the tray loading belt. The tray is then stopped and aligned, ready for the jars to be loaded as described above. The tray former outpaces the tray loader, creating tray accumulation on the overhead conveyor. A back up sensor locates on the overhead conveyor and when trays back up to that sensor, a signal is sent to the tray former to pause. There are approximately 22 trays in accumulation between the former and the loading area. The accumulated trays are used when the tray former stops or has jammed